It is not always possible to apply the same tightening torque to a plastic assembly as a metallic one. Often there are good reasons why it might be required to but the majority of plastics are relatively weak and all suffer from creep to a greater or lesser degree. However in a carefully considered application and with the right Tappex thread insert it is possible to work around, and sometimes achieve, the same tightening torques that may be applied in a purely metallic assembly. 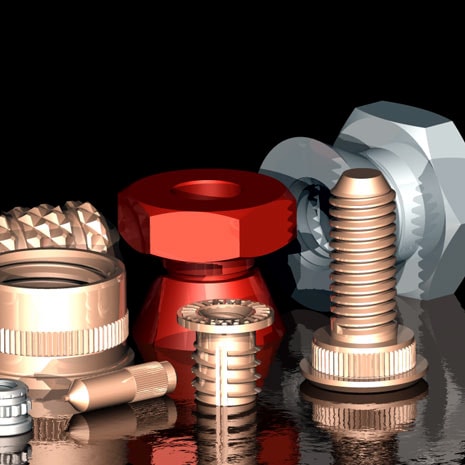 The application torque is entirely different and takes into account all the elements of the assembly and the interaction between those elements. It is a much more realistic view of the torque performance that can be expected. Considering an ideal situation, here the mating part would be metallic and has a hole in it that is slightly larger than the outside diameter of the bolt that is passing through it and into the insert in the plastic moulding. The metallic mating part is against the moulding face there is no gap or gasket.
In this situation, as torque is applied to the bolt, after the head of the bolt has contacted the mating part, a pull load will be transmitted by the thread helix to the insert. Initially the insert will resist this load until it reaches a magnitude that the plastic surrounding the features of the insert cannot withstand. The insert will move, the plastic flowing, allowing the insert to come into contact with the metallic mating part. It should be noted that this movement should be restricted to a maximum of 0.3mm by the correct location of the insert. This prevents it partially failing in the plastic, whilst providing a clamp condition for the mating part against the face of the plastic moulding. Once the insert is in contact with the mating part the situation changes, the insert can no longer move in the plastic, any further torque applied to the bolt generates tension. This tension forces the end face of the insert against the metallic mating part, the friction between these faces creates a clamp that resists the torque applied.

In addition it is worth remembering that friction between the bolt head and mating part and between the male and female threads results in losses. So only a proportion of the additional applied torque is converted into tensile load, this can be quite significant depending on the frictional characteristics. The contact between the end face of the insert and the metallic mating part is often the major component resisting the radial component of the torque applied to the bolt. In this ideal situation it will sometimes be the bolt or the internal thread in the insert that becomes the limiting factor. The application torque, in this instance, would be much higher than the pure radial torque that the insert alone will withstand in the plastic.

With 60+ years experience in the design and manufacture of Threaded Inserts for most Plastics, Woods, non-Ferrous Metals & now Composite materials, Tappex threaded fasteners are to be found amongst very diverse Industry applications & operating environments

© 2020 Tappex Thread Inserts Ltd. All Rights Reserved. Registered in England & Wales. Registered office: Masons Road, Stratford-upon-Avon, Warwickshire, CV37 9NT, UK
T: +44 (0) 1789 206600 E: sales@tappex.co.uk Company No: 00575166. Website by eby Design ltd
We use cookies to ensure that we give you the best experience on our website. Are you happy to continue?
AcceptDeclineAdjust settings
Revoke Cookies